Innovation and patenting in India and why it’s not among the top 5 yet.

India houses over 1.3 billion people, 1.2 million businesses and is the 5th largest economy in the world. It is also one of the largest exporters of brains and talents. A 2007 US survey found that between 1995 and 2005, more companies were launched by ethnic Indians than by immigrants from Britain, China, Japan, and Taiwan combined. In Canada, people of Indian descent are twice as likely to hold graduate or professional degrees.

Though closer to home, the picture looks quite different. High technology exports constituted a meagre 0.81% of total exports in 2014 and the country still relies heavily on agriculture exports.

Although India is a hub of immense economic activity, its efforts to boost R&D and innovation are lagging. This can also be seen through the patenting activity in the country. India does not figure in the top 5 patent offices of the world where much smaller countries like Japan and South Korea shine.

So what is holding India back? Is it not ready to protect and reward its inventors yet? In this article, we go through some of the challenges that India is facing and how it might counter them.

Creating robust IP laws in a country like India is a complex problem. The Indian government has to strike a balance between the needs of the 1.3 billion citizens and the rights of patent holders. The situation gets trickier considering foreign companies file more patent applications in India than the local companies.

Before digging deeper into the Indian patent landscape, let’s take a global view and understand how the top IP offices operate.

An introduction to IP5

IP5 is a forum of the world’s five largest intellectual property offices. These offices are set up to improve the efficiency of the examination process for patents worldwide. The forum facilitates greater integration of the global patent system through sharing of patent data.

The members of IP5 are:

The working group comprises representatives and working members from the IP5 offices. WIPO is monitoring and supporting the IP5 forum through aspects including a quality survey, IT platform maintenance and financial issues. Representatives from WIPO also observe key metrics and compile recommendations on its future long-term viability.

The IP5 Offices together handle about 80 percent of the world's patent applications, and 95 per cent of all work carried out under the Patent Cooperation Treaty (PCT).

The IP5 Offices work together closely to improve efficiency. They address the growing backlogs in applications that are pending worldwide. The heads of the IP5 Offices meet annually to decide on strategy and review progress.

Where does India stand among other IP offices?

A total of 50,659 patent applications were filed exhibiting an increase of about 5.9 % in 2019 as compared to the previous year. Trends in the last five years concerning the filing of IP applications in India are shown below:

The data provided by the Indian IP office in its Annual Report of 2018-2019 shows the applications filed by foreign applicants were more than double (32,304) compared to those by Indian residents (15,550).

The objective of the Indian government was to promote publicly funded research and development which has an early translation of these innovations into commercial use. But the data compiled from the patent office’s annual reports since 2009 does not indicate any significant improvement in filings from the country.

Although India has invested a lot to make it’s patent system transparent and efficient, it still lags far behind IP5 countries. Comparison between highest and lowest patent applications registered among a few countries is given below.

Patenting activity is an indicator of innovation and India has seen an infinitesimally small rise over the years in the patent filing. Compared to the five big patent offices, the patent offices of India show relatively low application volume. According to the annual report by the Ministry of Commerce and Industry, India has a very minute growth, seeing its application-level increase from 8,538 in 2000, to 50,659 in 2019. There are several factors listed below which added up as a reason for India losing its grounds.

Research and development investments in India

It’s also interesting to note that unlike other economies, most of the R&D investments in India are made by the government. For instance, in 2015 Indian corporates spent a meagre $17 billion in R&D while their Chinese and American counterparts spent $286 and $ 341 billion respectively. It is quite clear that the private sector has an important role to play here.

This could explain why the foreign patent applications in India are steadily rising while the volume of filings by residents hasn’t shown any significant improvement. 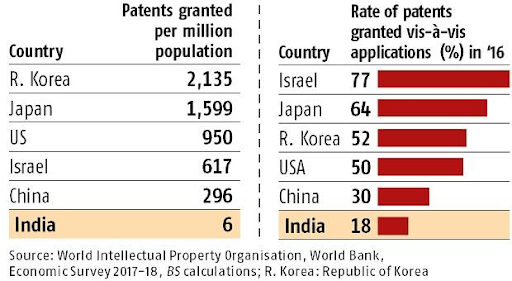 Global spending on R&D has reached a record high of almost US$ 1.7 trillion. It is interesting to note that the top 10 countries account for 80% of that spending. According to a report by UNESCO Institution for Statistics (UIS), China spent a whopping $ 372 billion in R&D of which over 77% came from the private sector. While in India, total R&D investments stand at $52 billion of which only 37% came from the private sector.

Below you can see a chart which breaks down R&D funding sources for various countries. 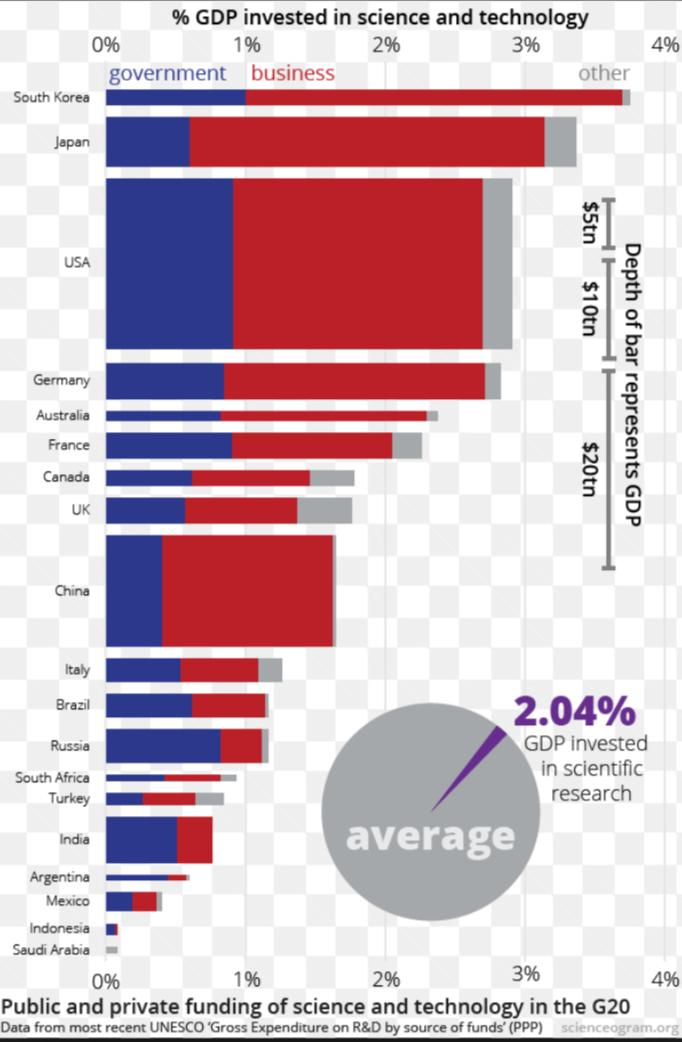 As for international applications, none of the Indian companies made it to the list of top 50 filers globally, while as many as 13 Chinese companies featured in it.

India has been accused of having weak legislative and enforcement mechanisms to protect the rights of patent holders. This phenomenon is more prominent in the pharmaceutical industry where there is a delicate balance between ensuring access to life saving drugs for citizens and rewarding companies to aggressively invest in R&D to discover new drugs.

Up until 1970, India prohibited product patents for medicine. This means you cannot have monopoly over a pharmaceutical drug, you can only patent the process by which it is manufactured. If someone discovers an alternate way to synthesize the drug, they can bring it to the market too. This gave a huge boost to the domestic pharmaceutical industry. Indian companies started producing and selling the expensive drugs at much lower prices and soon the generics drug market boomed.

In 1995, India joined the WTO and had to bring its patent policy in compliance with the TRIPS Agreement by 2005. This means India had to now allow product patents in the pharmaceutical sector. This could create problems for Indian consumers by limiting access to expensive life saving drugs and for Indian companies as they cannot produce cheaper generic versions.

India has been criticized for getting around this problem by use of compulsory licences and patent revocations. A 2014 report says “Indian policy continued to breach international standards of the protection of innovation and patent rights, revoking patents generally accepted around the world and announcing that other patented medicines are being considered for compulsory licences.”

The first such compulsory license was issued in 2012 for Naxavar, a crucial drug for kidney and liver cancer sold by Bayer. From an exorbitant Rs 284,000 per patient per month, the drug’s price dropped down to Rs. 8800 per person per year.

It is worth noting that some experts believe that India’s laws are in perfect compliance with the World Trade Organisation (WTO) norms. Further, they argue that Indian Patent Office has a well defined yardstick for inventiveness and patents are not granted for trivial inventions which is a problem in developed countries.

Of the 50,000 patent applications filed in India in 2018-19, only 30 per cent came from local companies or individuals while the rest were foreign applications.

India has 8 million students studying technology across 10,000 educational institutes. Over 95% of these institutes have not filed any IP and the remaining file between 2000-2500 patents all put together annually.

These dismal numbers are attributed to low IP awareness among Indian SMEs, students and academia. It is estimated that small and medium enterprises (SMEs) in India are losing millions in revenues due to lack of awareness about IPRs (intellectual property rights).

We will discuss the steps taken by Indian Government to fix these problems below.

On 31st December 2020, IPO declared that there are 115,750 patent applications pending examination or disposal.

This is a huge improvement from 232,000 pending applications in 2017. IPO has been ramping up its technical workforce to handle the workload through there are still plenty of concerns that need to be addressed.

However an Indian examiner's monthly salary is less than a third of his/her counterparts in other foreign patent offices. Payscale reports the current salary in the range of INR 50k - 60k / month which is far less than what the private sector offers to high quality technical or scientific talent.

Additionally, the criteria for promoting talent is also not clear. Patent examiners claim that the Patent Office does not offer performance-linked growth opportunities unlike other scientific organizations like Centre for Scientific and Industrial Research (CISR) and Defence Research and Development Organisation (DRDO).

Additionally, this high workload may also translate to diluted scrutiny and poor quality of examination. This can lead to bad patents being granted and create problems for entire industries.

India is known as the “pharmacy of the developing world” and millions of people rely on the generic medicines produced in India.

Up until 2005, India was not required to grant drug patents and Indian pharma companies were able to quickly reverse engineer existing drugs and provide them at a much lower price point. This made life saving drugs available to millions of people around the world.

Now that India is required to grant drug patents under the terms of WTO, it has adopted a policy that prioritizes public health over interests of the pharma companies. India is trying to rein in monopolies over life saving drugs by following strict patent quality standards and compulsory licenses.

This has put India in the crosshairs of multinational pharmaceutical companies who are regularly dragging the government to courts over controversial IP regulations.

One such high profile case is Novartis v. Union of India which was a long drawn seven year battle over the patentability of a cancer drug. It ended in the Supreme Court with the Union of India emerging victorious. The battle to limit the boundaries of generic drug manufacturing companies continues outside the courtroom.

India is facing pressure from the US, European Union, Switzerland and Japan to adopt stricter intellectual property measures. These countries often try to push stricter IP clauses via trade or investment agreements. These measures could help their companies establish stronger monopolies while hurting India’s generics market.

Apart from the reasons discussed above, it is possible that India’s low rankings on Global Innovation Index may be motivated by its unpopular image among developed countries.

It should be noted that even the patent systems in developed countries have their own problems and are accused of granting too many useless patents and controlled by corporate lobbies. India is building and refining its patent system slowly and has the opportunity to be a model patent system for the entire world.

Steps taken by Indian government to improve the patent system

Other efforts taken by Government include: